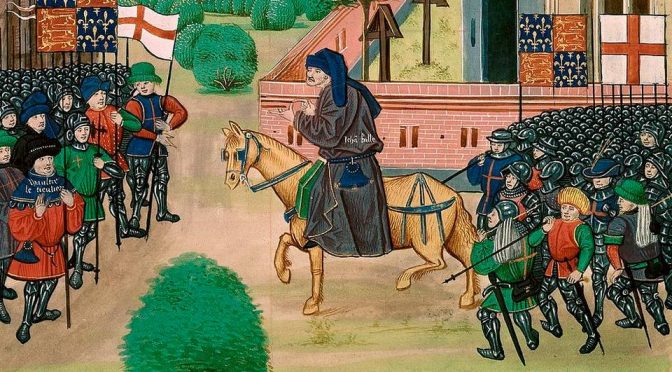 It’s a tough one, this. William Morris’s novella A Dream of John Ball paints a heroic picture of one of the most complicated and contested episodes in English history: the so-called Peasant’s Revolt of 1381. The main character, dreaming his way back to the 14th century from Morris’s dirty, depressed and over-populated London to a clean and well-kept Kentish village, discovers he has arrived at exactly the moment when John Ball, the excommunicate priest recently sprung from Maidstone jail by a growing body of rebels, arrives to preach and incite the locals to take up their weapons and march on London. The villagers are decent, happy to share what they have with the stranger, and all too glad to follow John Ball to bring down the feudal system and reinstate the primordial communism known by the first men and women, when there were no gentlemen. But was it like that?

I’ve been homing in on the Great Rising from two different directions. Firstly, this blog, and my all interest in Morris and his political messages, and secondly, from the book of Suffolk ghost tales I’m researching and writing at the moment. Suffolk was the original home of the hated Chancellor, Archbishop of Canterbury, Simon of Sudbury, and the county exploded into rebellion as Kent and Essex rebels were marching on London. These are dark tales. There’s no surprise that there are ghost stories associated with the rising. The rebellion in Suffolk, especially around Bury St Edmunds, Mildenhall and Lakenheath, was brutal, full of revenge, petty and great.

And that’s one of the problems, for me. This communist uprising with its noble aims of distributing the wealth to one and all was no such thing. Did John Ball even write his letters? The famous phrase, ‘When Adam delved and Eve span, who then was the gentleman?’ was in the common parlance. Did Wat Tyler taste power and have it go to his head? Did Jack Straw even exist? What then was going on?

Well, as with everything in life, it’s complicated. The 14th century was a tumultuous one – I remember reading when I was a teenager Barbara Tuchman’s magisterial (but now rather out of date) A Distant Mirror, which calls it a calamitous century. The Hundred Years War, the Black Death, revolt and rebellion, it was all kicking off. And yet, for many, in the latter half of the century, things had improved in southern England, at least. Much of the population had meat on their tables, wore better clothing, had the chance of better wages. The successive plagues had more than decimated the population, and so there were opportunities for those who were left. As you can imagine, landowners were not keen to face up to this. Parliament pushed through statutes that artificially suppressed pay. Not popular. Worse, the war with France wasn’t going well in the aftermath of the last illness of King Edward III and into the minority of his son, Richard II. And war was costly.

It’s a tough one, too, because I approve of taxation. Unlike Morris, whose ideas tended towards a stateless anarchism, my experience of living in the safe, peaceful society that has been Britain for the majority of my forty-plus years on this earth has led me to believe that a form of taxation that allows us to pay when we can (i.e. when we have an income) for things that we might need when we can’t – things like the our universal health care system, our free schooling, our state pensions, our welfare state, and, when I was young, for the fees and grants that allowed everyone to go to university, if they made the grade. And the peasant’s revolt is a lot about taxation, and not wanting to pay it.

But how much do you tax? And whom? There can be no doubt that a line was crossed by parliament. It was Simon of Sudbury who demanded the last and largest amount – £160,000 (a labourer was paid roughly 5p a day, just to contextualise that). Over a 3 or 4 year period a bewildering number of different taxes were laid on the country, and everyone, rich and poor alike, had to pay. There’s even an account of a sergeant at arms, John Legge, lifting girls’ skirts to see if they were old enough for sex i.e. had pubic hair, and were thus old enough to pay the tax, liable from age 15. Nice. The tax collectors turned up with bully boys, and corruption was rife. The burden of the later taxes fell hardest on the poor.

And people were already angry. Angry with successive wars, Angry with a venal church that cared little for the pastoral needs of the ordinary folk in their parishes. Angry with the continuing burden of petty rules and regulations, particularly for serfs, who were effectively owned by their landlord – they had to pay, for example, merchet, a kind of fine to get married, and owed time and produce to their lord. It must have seemed they got little in return for this bargain. More people were making their way off the land and into towns, and in the towns and villages too were itinerant preachers, ready to speak of a better way of being – as John Ball is supposed to have written, ‘Now pride reigns as prize, covetousness is held wise, lechery without shame, gluttony without blame, envy reigns with treason and sloth is in high season. God bring remedy, for now is time…’ To rise up? Yes.

But to rise as they did, looting and murdering? That’s what I find hard. There are moments of calm, such as when John Wrawe, in Suffolk, and his men, repair to an alehouse in Long Melford for a pipe of wine, and pay the landlord from their takings, Robin Hood style. But contrast that with the treatment of John de Cavendish and John de Cambridge, a king’s justice and Bury’s prior respectively. One waylaid and executed at Lakenheath, the other at Mildenhall, and their heads paraded around Bury for the amusement of the people. Then there’s the looting. Some of it reasonable – take the records and burn them, that’s a great way to start a new world order, as we are then, in theory, created as equal as we were when we were born. But much of the violence seems meaningless. It reminds me of the riots in Britain in 2011 after the trigger incident of a police killing. And again, the revengeful outpouring of hate and violence that erupted after Trump was elected. The people are angry. They will take revenge.

The times are more dangerous now, the stakes far higher. John Ball was a sort of left-wingish (if we can say such a thing of a medieval character!) populist. The populous were whipped into action all too easily because they had cause to be angry and had no voice. Then, the rebellion was put down hard. Nobody listened. The chroniclers vilify Ball and Tyler and the rest. They try to make people like Simon of Sudbury and John de Cambridge martyrs, and my goodness, these were not nice men they were trying to sanctify! But they were the establishment, and it had enough might to suppress pretty much anything, then. Does it today? Do we want to be able to? Do we want more surveillance? Do we want harsher laws to ‘protect’ us? No. So we mustn’t make the mistakes of the past. We must listen to those who are angry and find common ground, the common ground of our thoughts and the decency with which we all believe we are living our lives. And those who are angry need to listen, too. Need to see that revenge and violence against whoever the scapegoat might be – whether the establishment, or whether against a random ‘other’, such as the forty unfortunate Flemish clothworkers murdered during the Revolt in London – is not the way to make their own lives better.

And so, for once, if we are going to dream of John Ball, let’s make him a not rabble-rouser but a peaceable man.