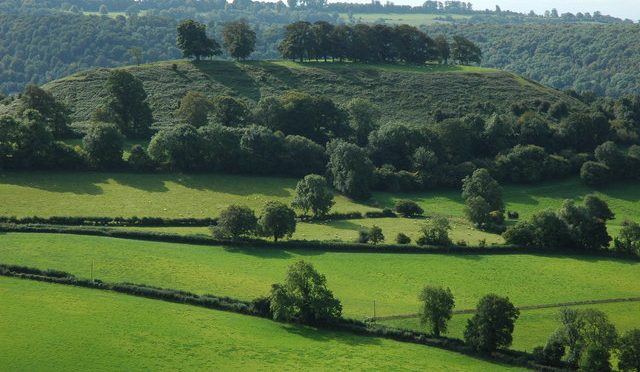 It’s the ghost month, October. The month of Halloween and Samhain, when, once again, the veil is thin between this world and the Otherworld of the fairies and the dead. The nights are drawing firmly now, too – at the end of the month, we’ll be changing the clocks and suddenly the evenings will be short. It’s a month for storytelling, for telling tales of that Otherworld. I’ve got a number of gigs coming up in the next few weeks to do just that, and to reveal the hidden places where you might find … something else …

Here’s the science bit: I’m with Anthony at The Wilson in Cheltenham on the 26 Oct, in Stinchcombe Village Hall on my ownsome todd on the 27 Oct, and this Friday 13 I’m in Newent with Anthony, Val Dean and Austin Keenan at the Secret Gallery – more details at the bottom!

One of the tales I’ll be telling is a tale from very close to where we live in Stroud, On Downham Hill, which concerns a certain inn that you might – if you were lucky, if you were unlucky – find up there on a bleak night… I see it a lot, as our cat’s cattery is at the bottom of it! I confess I’ve only been up there once, but fittingly, it was in the snow… Downham Hill is one of the range of hills that lie close to the village of Uley, south of Stroud, north of Dursley. It sits by itself just southwest of Uley Bury with a stand of trees on its flat summit.

This is a storied area. From Downham Hill you can easily see the next hill west, Cam Peak, whose pointed tip derives from the fact that the Devil dumped it there when he was on his way to dam the Severn (because there was, of course, too much God in Gloucestershire), and was foiled by meeting a cobbler with a full pack of worn out shoes to fix. Asked by the Devil how far it was to the river, the cobbler thought fast and told the Devil it was a long, long way – he’d worn out all those shoes just coming from there… 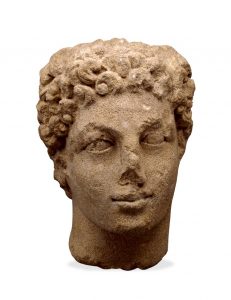 There’s a pair of silver gates buried up on Crawley Hill, somewhere – something to search for on the long roll down to Uley from Stroud. It might be by Money Quarr on West Hill – the site of a Roman complex, including a temple to Mercury[1]. In this case, then, the idea that there might be treasure has been borne out by the finds of statuary – including this head of the cult statue of Mercury – coins, curse tablets and more. But silver gates? Just keep looking, folks!

And is Cam Long Down actually Camlann, where Arthur and his son, Mordred, fell..?

Downham Hill, however, is a place of fairies. There may be other records of the fey in Uley – was Fiery Lane, the road from Uley down to Owlpen, once Fairy Lane? Roy Palmer suggests so.[2] But Downham Hill, somewhat isolated despite the farms that ring its base, has the reputation of being a place you wouldn’t want to travel to alone. Just the place to find the trickery of the fairies that our protagonist encounters, you might think.

But there’s another explanation for why the villagers kept away. Downham Hill was chosen in the 18th century as the site of a smallpox hospital. It was, apparently, one of the earliest ones, and may have had a link with Dr Jenner, who discovered the vaccination for the disease, and who lived at nearby Berkeley. If it was an isolation hospital, then no wonder the villagers were suspicious – and the hill got the nickname ‘Smallpox Hill’. Added to that is that on the top of the hill is further remains of an older tower-like cottage put up during the reign of  Edward III – at around the time of the Black Death[3]. It really is a plaguey hill. Mind you, all the websites are rather vague about both the monument and the hospital, so maybe it’s the fairies after all, warning all us folks away!

Fairy inns are known up and down Britain, and fall into the tale type to do with fairy gifts. Another tale being told on Friday 13th is that of the fairy ointment, where a midwife gets an inadvertent gift from the fairies … until they discover she has it. This tale too shows that the fairies like to give with one hand and take away with the other – as all Harry Potter fans know leprechaun gold turns to leaves after a little time. Probably the best you’re going to get out of it is for everything to stay as it was – but there is a little tale not that far from Uley, from the Wickwar and Wotton-under-Edge area of a ploughman who hears a small, shrill lamentation from by his feet, and when he looks down he sees a tiny little peel (the wooden shovel that bakers (and pizza makers!) use) snapped in two in the dirt. Very carefully, the ploughman picked up the pieces and took it home. That night, he managed to fix it, and the same he took it back and put it where he found it. Later, smelling baking, he followed the smell, and there, in the furrow was left a tiny plum cake – which he ate![4] But perhaps the traveller on Downham Hill was luckier … he got away with his life.

If you’d like to hear this and other stories of the season, here are the gigs: