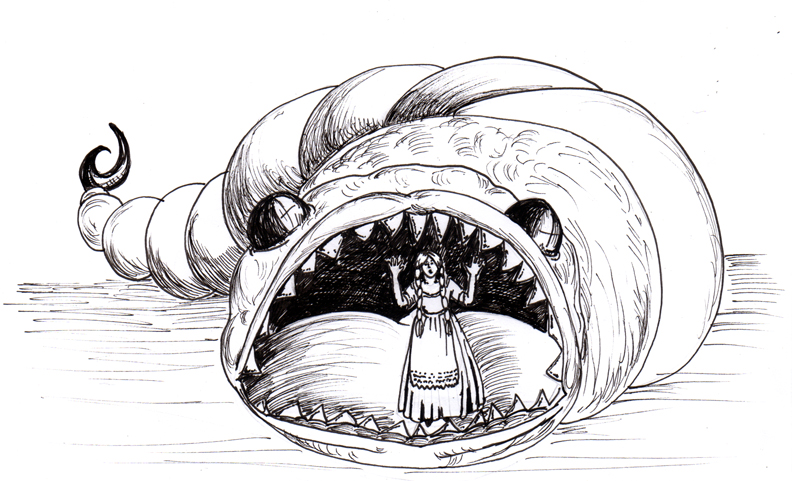 On National Dragon Day this year – you might know it better as St George’s Day, the 23 April – two agents from DCHQ (Dragon Conservation Headquarters, not the Other Place) in Cheltenham Agent Green and Agent Krisa will be coming to the Museum in the Park, Stroud, at 3pm to teach dragon tracking and to tell dragon tales straight from the archives – and straight from the dragon’s mouths…

Here’s one of the stranger tales in the archives…

In the small village of Little Langford, on the banks of the River Wylye and on the edge of Grovely Wood, there once lurked a monster. It terrorised the village – it jolly well near destroyed it! But the question is – was it there at all?

The evidence for the tale was self-evident to the villagers. Why, it was carved on the very doorway of their church! There you could see the poor unfortunate maid who thought she’d tamed the beast dressed in her long skirts and there, about to engulf her, are the pointy teeth of the maggot. Carved in the stone below that is a hunting scene, and the villagers said that shows the beast being rounded up by the hunters.

The story is featured in my Wiltshire Folk Tales book, although there are other variants of the legend. Little Langford was one location that had alluded me when I was researching the book. I have to confess – we were put off by utterly torrential rain and spent the day in nearby Salisbury in the cathedral and coffee shops! However, on our way back from the Isle of Wight a week or so ago, we finally went. Little Langford is a very small village, and has been rather compromised by the railway that runs alongside both the road and the river.

The church is on the other side of the railway to the few houses on the road and, when you get there, appears to be dwarfed by its vicarage. In the church itself we found another version of the tale – this time the maggot, rather than being destructive, did some good in the world. It ate the maid, yes, but she was not an innocent girl but a lady who had wanted to deprive the villagers of their right to gather wood in Grovely Wood.

This wood gathering is a contentious business in the area. In the close by village of Great Wishford, the villagers had to enact a tradition to ensure their rights to gather. The laws concerning this go back at least to Elizabethan times, from when there are charters saying that a group of dancers have to go to the cathedral and be blessed. This used to take place in Whit week, and now – still – happens on May 29, Oak Apple Day. The day begins with collecting the wood – oak no thicker than a man’s arm, green willow and hazel wands – and raising the cry ‘Grovely, Grovely, and all is Grovely!’ All dressed up, the villagers proceed to Salisbury with their banners: ‘Unity is Strength!’, which I presume must go back to the 19th century when it was necessary to fight for these rights. Some branches are placed on the high altar and all is blessed. Then the party begins! So, you can see how excited the villagers might get to have this critical right, the right that gave them warmth through the winter in the firewood they gathered, taken away. But going to the cathedral and dancing is one thing – resorting to a giant maggot is another!

The story echoes many tales of unsuspecting people nurturing something that turns out to be a dragon – or, as they are often called in England, a worm.  Now, worms and maggots, it could be argued, are fairly similar in looks, it’s most likely the maggot is really a juvenile dragon.  Dragon stories are very rare in Wiltshire, but in next door Somerset there are many…

But is this really what’s going on? The tympanum has other interpretations, and may in fact represent another Wiltshire legend. If you don’t want to hear that it might not be the maggot – stop reading here!

One of Wiltshire’s key saints is St Aldhelm, a 7th century saint who studied at Malmesbury Abbey under the Irish monk Maildubh and at Canterbury, so learning both Roman and Celtic Christianity – he’s also featured in Wiltshire Folk Tales… I like Aldhelm for a particular reason. He was storyteller. Understanding that people can get bored when being preached to, he would liven up his performances with songs, and clowning – even juggling! It was his mission to raise the educational level of Wessex and he wrote songs to help ordinary people understand Christian stories. But there was one time when he couldn’t keep the audience. He was in a place near Warminster, and it wasn’t going well. So he set his staff aside to try some juggling, but then everyone started looking at the staff – it had taken root and flowered! 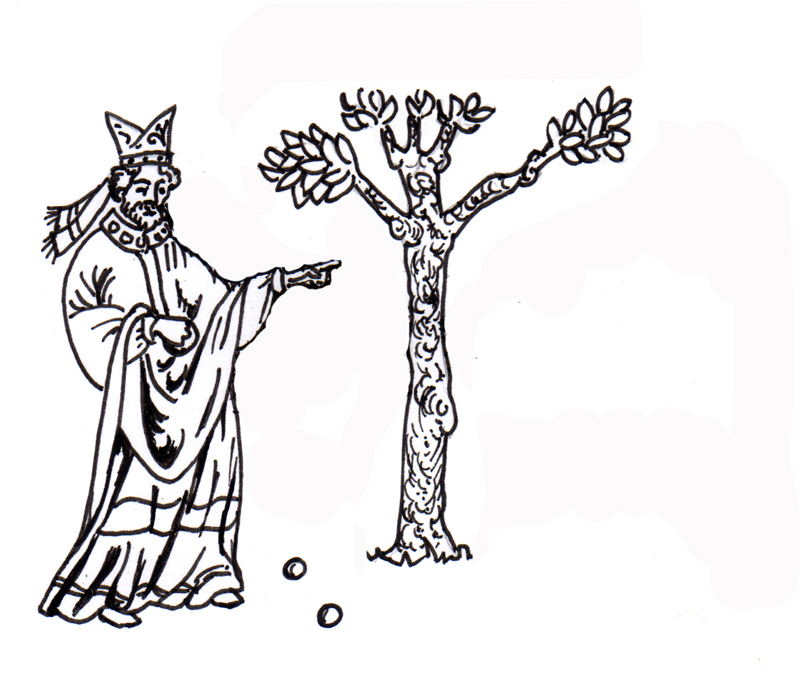 There are those that say that the tympanum shows St Aldhelm with his staff now become an ash tree. If you look closely you can see it’s a bishop – there’s his crozier in his hand, his mitre on his head, the correct garments underneath… The carving may have been done around the time of Bishop Osmund of Sarum (1078–1099). Osmund was a particular promoter of Aldhelm’s legend.

But it might also represent St Nicholas, the original Santa Claus, to whom the church is dedicated. You see the three dots in the pattern next to the maid/bishop? Those could represent St Nicholas’ emblem of three balls. BUT – there’s more! For you see, in his youth St Nicholas had an encounter with a dragon – one that marks him as a cuddlier, friendlier saint than our St George. Once, a town was being terrorised by a dragon, and Nicholas was brought in to help. Maybe the town’s folk thought he’d slay the beast, but instead Nicholas charmed it and calmed it so that it troubled the town no more … and they didn’t trouble it. So maybe those sharp zig-zags really are dragon’s teeth and the tympanum shows the moment where the saint calms the dragon down … just in the teeth of time!

If you’d like to hear the story of the Maid and Maggot, of St George and Dragon and more, then join us on Sunday 23 April at the Museum in the Park, Stroud at 3pm. Agent Green is really Chloe of the Midnight Storytellers, and Agent Krisa is me, Kirsty from Fire Springs.

One thought on “The Maid, the Maggot and the Saints”