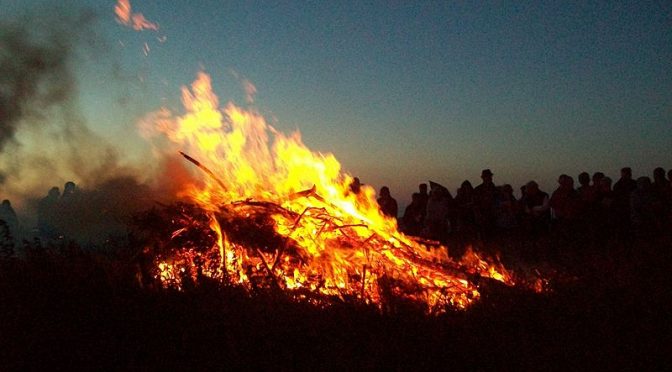 It’s midsummer, and, typically for Britain, the sun’s gone in, the rain’s coming down. Flash floods abound and friends have had both their houses and their workplaces inundated. Today, this is obviously a major inconvenience for those concerned, but for the rest of us we just note it on the news and move on. After all, there are more important things to worry about than a spot of rain at midsummer, aren’t there?

But can you imagine a time when you approached the middle of summer with a nervous eye on the weather, and noted the downturn from sun to rain with looming dread in your heart? Well, any farmers reading this probably know exactly that feeling, but in today’s globalised society that’s their problem, isn’t it? If one farmer loses his crop, then, well, hard cheese, bad luck – there’ll always be a job at the local Aldi, won’t there, if it all goes belly up? After all, the food just keeps flowing in whether British fields are bathed in sunshine from June to August or whether the rain comes down in stair rods. We all know – head knowledge – that this wasn’t always the case. We might even think that this insistent globalisation is a bad thing and try to eat seasonally. But buying your asparagus in May and your strawberries in June doesn’t impact on the fact that there will be bread on the supermarket shelves every day of the year, a bad harvest or no.

If it rained after midsummer – rained substantially, as it often does in our green and damp land – then the crops could be in danger. And if the crops were in danger – the wheat and the barley: the meat of bread and beer, staples of peasant life for many centuries – then you and your family might not have enough to get through the winter. You might starve.

So it’s no surprise that midsummer has long been celebrated – the sun shines the longest, the hay harvest is in, the wheat and barley ripening in the fields, the year stands in the balance… Much has been written about the many customs. I’m just going to focus on a couple, both of which took place in medieval Gloucestershire.

The first probably relates to an existing, vibrant custom that now takes place on the Spring Bank Holiday (which I, erroneously, still call the Whit bank holiday…) on Cooper’s Hill not far from Stroud. This is, of course, the cheese rolling. Once, it used to happen at midsummer. A quaint English custom, you might say. Well, maybe quaint isn’t the right word for people racing down a 1:1 hill in pursuit of a cheese – but unequivocally English. But people right across Europe have been rolling things down hills at midsummer for a long, long time.

In the 14th century an irate monk from Winchcombe condemns the practice. Earlier yet, in the 4th century AD, St Vincent in his Acts describes the pagans of Aquitaine doing it. They were doing it in Devon, at Buckfastleigh in the 19th century, and in the Vale of Glamorgan, too.[i] They’re still doing it (though at Easter!) in Lügde in Germany – and my stepdad even saw it, back in c. 1970. But rolling what, precisely?

A flaming wheel, of course! Here’s a clip from Lügde:

Traditions vary, of course, but the standard across Europe seems to go like this: the people would take a cartwheel and cover it in straw, then insert a long pole through the middle, so as to guide it. In the semi-darkness of the shortest night they would light the wheel and set it rolling downhill. Bad luck if it went out, but if it blazed right down to the bottom, then, well, the sun would shine and the rain would come when they were needed and there would be a good harvest! In some places, it was luckier still if it hit water – Buckfastleigh, for one, and also Konz on the Moselle. The practice died out in Britain after a revival in Buckfastleigh in the 1950s failed, but it’s possible that the cheese rolling is an echo of this even more dangerous practice! I would also note that it’s another indication of our European shared culture to all the Leave sayers…

I heard about the second custom at a little conference in Wiltshire last year – a scholar talking about rights and the commons mentioned a thing that made my Gloucestershire ears prick up.[ii] There survives a document from c. 1300 that charts the duties of over 150 families, tenants of the Lady of Minchinhampton in the various hamlets and villages atop the hill. Now the Lady was in fact the Abbess of Caen in France, unlikely to have ever come to Minch, but the manor was highly organised nonetheless. Alongside the duties of paying the penny tithe to Rome, haylone (reaping hay), bederipe (reaping and mowing) etc., some households were expected to be watchers on St John’s Eve.[iii]

Watchers? Watching for what? Today we expect the veil to be thin at Halloween, but in the medieval calendar St John’s Eve (23 June, and the midsummer festival) was one of several times that the dead might return to the places of the living, and that you might be able to predict the future. It was a time to light the fires and keep what scant darkness there was away. In Shropshire in the 14th century, ‘men waken at even, and maken three manner of fires: one is clean bones, and is called a bonfire; another is of clean wood, and is called a wakefire, for the men sitteth and wake by it; the third is made of bones and wood, and is called St John’s Fire’[iv] – the stench of the bones also kept dragons (and maybe spirits?) away. It was a sanctioned Christian feast – among all the other stuff going on, the fires also signified the light of St John the Baptist, whose feast it was in the morning, who ‘pointed out Christ in this world of darkness.’[v] It must have been a fun occasion – the writer of the article on the Minchinhampton custumal, CE Watson, describes it thus: ‘Wild orgies often marked the night, drunkenness and worked up excitement being the reaction to many superstitious fears.’[vi]

But waiting for the light in a time of darkness arouses fears in all of us. Imagine the people of Minch, up on the common, no doubt as much then as now the haunt of ghosts and creatures of the wilds, huddling around the wakefire telling tales – of the fairies; of how tonight was the night that dragons mated, roiling in a writhing ball and creating the powerfully magical ‘serpent’s egg’; of how if you went to the church on midsummer’s eve you’d see who was to die that year (and you might just see yourself!) – and reeling a bit from the beer provided by the richer folks, giddy from the dancing and the release from the toil of the summer’s work and one can easily imagine how things might get a little crazy … especially if the fairies were indeed about that night!

And why not? It’s midsummer! In the light of the night why not go crazy? Gloucestershire’s a good place to do it! Or, if you are really bold, why not hop over the border to Somerset, Warwickshire or Wiltshire where the stone circles lie and spend the night alone in a circle … you’ll come out a bard – or mad. Happy midsummer!

[i] Find out more in Ronald Hutton’s Stations of the Sun: A History of the Ritual Year in Britain (OUP, 1996)

[iii] Find out more in CE Watson’s ‘The Minchinhampton Custumal and its place in the Story of the Manor’, from the Transactions of the Bristol and Gloucestershire Archaeological Society, 1932, Vol. 54, 203–384