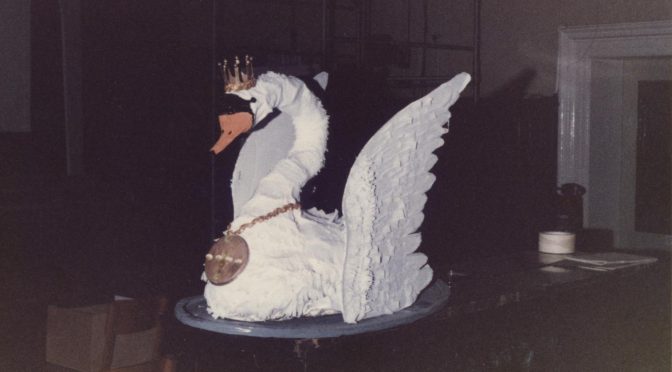 Okay, I lied – there are going to be three blogs on the Green Children. That’s how much I love this tale. This one, however, is a more personal take, going back to my earliest memories of Suffolk’s stories. As a tiny child my mythology was personal, concerning only the village, Layham, where I lived – with terrors like the bridge over the Brett by the mill which had gaping holes that would, I was sure, suck me down; like the fascinating fungus in the dead elm spinney next to the house. I had no idea that the rectory where I once got terrifyingly lost at a garden party was where poor Maria Marten had her first and only job, or that Black Shuck lurked on the lanes into Hadleigh – but that was soon to change.

Back in 1979, when I was six or seven my Mum started making really exciting things. Mum was props mistress at the local amateur dramatic society, Hadleigh Amateur Dramatic Society (HADS), and I became used to her making all sorts of strange things – I particularly remember the box of fake gems that I loved to run by fingers through and dream… Some of the furniture she acquired actually stayed in the house, I think! This time, it was a huge, huge prop. It was a swan – to be the centrepiece of a medieval feast – and I was fascinated. Mum says of it, ‘I know I used a bird book to work from. It must have taken a while, though, to build up all the stages. It was a wire netting base then papier maché then possibly crepe or tissue paper.’ It was, as you see, a thing of beauty!

There were also tempting puddings – almost edible, they were: Mum didn’t have any clay so she simply made the puddings from pastry, which she then painted and adorned with plastic fruit. Having been a props mistress myself, I know they often have long, long lives – not so these. She says, ‘eventually they just disintegrated in the props cupboard…’

But what were they for? I knew it was a play, of course, but I was intrigued by the title, ‘The Green Children’. Who – or what – were these children, and why were they green? I was too young to go to the play and find out for myself, but Mum must have told me the story. It was one of my first encounters with the county’s folklore, and I loved it, even though it was a sad tale. It stayed with me ever since, helping develop a fascination with fairy lore and the Otherworld that lasts to this day. The sad fate of the green boy particularly affected me – and still does, I confess. As a child who was uprooted from my home several times, I admire the green girl for getting on with it, knuckling down and fitting in, but I was like the green boy, lonely and pining for a time and place where I was comfortable…

The play was written by a couple who lived a couple miles north of Hadleigh in Whatfield, Mona Bruce and Robert James. The Internet Movie Database describes James as ‘a prolific “I know the face, but” performer of intelligence, authority and a distinctive countenance’, whose finest moment may have been as a ‘conscience-stricken scientist’ in the 1966 Doctor Who episode, ‘The Power of the Daleks’![i] His wife was a writer and actress, ‘known for Within These Walls (1974), To Sir, with Love (1967) and Agatha Christie’s Miss Marple: 4.50 from Paddington (1987).’[ii] They became heavily involved in HADS – James was the Chairman, and also in the Whatfield Amateur Dramatic Society.

They wrote the play – actually a musical – in 1972, and it was revived in 1979, the production my Mum was involved in. Here’s what they have to say about it – it sounds as if we ought to have known the play better, if only for the tickly question of money! Let’s revive it, now! It was a humorous take on the story, full, says a local newspaper, ‘of funny Suffolkisms’ such as ‘“They must have been foreign,” said a startled villager. “’Appen they come from Essex,” came the reply.’[iii]

Fortunately, Mum has a few pictures from the production, which, in 1979, stared Allyson White as the green girl, and Stephen Hicks as the green boy. Captions my Mum’s. You can even see my Mum, looking willowy and Pre-Raphaelite in the background of the rehearsal one…

She – and I – wonder what happened to the swan…

I know, it’s been ages since my last post – a legacy of mad hecticness in my other life as a museum curator that has lasted from June last year until now! But, celebrating the 1st anniversary of the publication of the book (well, nearly), off we go again! And back, eventually, to Hadleigh, from where the first photo comes, and where I went to school as a child, living as I did a few miles away in Lower Layham.

I visited the new Vikings exhibition at the British Museum this week, and although the exhibition itself wasn’t all that exciting, it did set me thinking about how we think about Anglo Saxons and Vikings. A slightly depressing 20 years ago this autumn I started an MA in Medieval Studies: the Early Medieval World 400-1100 at York, so you can see that I am a bit keen on this period, and have been for a very long time… Feeling old! But it was a treat to go back to those roots when looking at the Viking material in the exhibition, so I’ll be posting a few blogs about this topic over the next week or so.

There are two stories in Suffolk Folk Tales that directly involve Vikings: King Edmund and The Legend of the Holy Well. In both stories I hope I have painted an ambiguous picture of the Northmen. Certainly characters like Ivar the Boneless and his brothers Hubba and Halfdan are vicious and bent on revenge, but they have come to avenge the great wrong they believe Edmund has done to their father Ragnar Lothbrok. But in fact, in the story, Edmund welcomed and befriended the lost Viking, and their shared culture allows Ragnar to slip into life at Edmund’s East Anglian court with ease. In the Holy Well story things are more complex. The early 19th century poem on which this story is based is itself based on a real battle at Nacton, near Ipswich, in the year 1010 between Ulfketel the Earl of East Anglia, and Thorkill the Tall, a Swedish Jomsviking. This was at the time at Sweyn Forkbeard was making a play for the English throne – on which more in the next blog! – but the names of the protagonists give it away. Thorkill was from Scandinavia, but Ulfketel is a Scandinavian name. Was he a Viking too? And, by the 11th century, after a century of intermarrying among the nobility – and likely below as well! – could you tell who was who, even if you wanted to?

Viking settlement in East Anglia begins after Edmund’s death in 869, in theory. But in fact it was another Englishman – the West Saxon King Alfred – who starts it in earnest. After subjugating Northumbria (867), East Anglia (869) and Mercia (877-9) Wessex was the next prize on the Great Heathen Army’s list, but, so the story goes, Alfred the Great rose up and defeated the Dane, Guthram at the Battle of Edington in 878 and Guthram, defeated, became a Christian. Triumph to the Saxons! And if you’d like to read that story, then check out my other Folk Tales collection, Wiltshire Folk Tales. Triumph to the English? Well, yes and no, as my (Scottish) Grandad would say.

What happened to Guthram after that? It’s a Suffolk story, after all. Guthram, by becoming a Christian with the nice new English name Athelstan, was now Alfred’s ally. They divided up their joint spoils between them, Guthram taking East Anglia, Essex and Eastern Mercia. Guthram seems to have taken his oaths seriously (this time!) and lived and ruled in the region, dying in 890 and being buried in what was presumably a royal vill, Hadleigh. Interesting aside – the Hadleigh Historical Society say in their timeline that Guthram killed Edmund. If true, it would an ironic full circle, given how much Alfred admired Edmund…

In the Vikings exhibition there is one really shocking thing (well, apart from some of the way the exhibition is designed, but that’s another story!). By the longship there is an assemblage of skeletons, heads separated from bodies, clearly hacked about – one hand has been cut through as the man was resisting even as his head was cut off. Here we are in a Viking exhibition. Clearly this is an atrocity by Vikings against the innocent English, isn’t it? Well, no. This was war. These men’s DNA has been traced back to Scandinavia. They are Vikings. Raiders? Warriors attacking from the Danelaw during wars between Alfred’s son Edmund the Elder and the Vikings over Mercian land? We can’t know. But it illustrates that there wasn’t a hair between the English and the Vikings – both were warrior cultures, keen to defend their own self-interest.

I’ll be blogging next time about the remarkable woman who wrote the poem that inspired the Legend of the Holy Well, and also Ulfketel and Thorkill, and about Sweyn Forkbeard and Edmund’s revenge, hopefully providing a small window into a time that must have been unsettling and difficult for the ordinary folk who lived in East Anglia – whether English or Viking.

2. St Mary’s Church, Hadleigh: Guthram was buried in an earlier church probably on this site