Those lovely folks in Inkubus Sukkubus recorded the whole show on 9 September 2016 and are releasing videos on You Tube! Here are a selection – watch this space for more as they come up.

Kirsty starts the whole thing by telling The Deerhurst Dragon:

Ronald Hutton introduces the band in his own inimitable style:

And here’s one of my all-time favourite songs, the Witch of Berkeley: 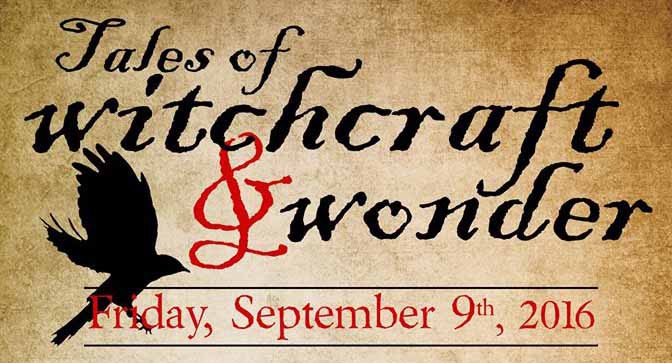 On Friday night I had an absolute blast! I had the privilege to take part in an amazing show, Tales of Witchcraft and Wonder with the incomparable Inkubus Sukkubus, as their storyteller. This was part of Gloucester History Festival – so it was great to introduce a bit of folklore to all that ‘real’ history. We were telling the histories we all want to believe are true! The stories that are true at gut level … the kind of stories that make you nervous when you go are out into the darkness at night … and in some places, during the day as well. And though I might have been the official storyteller, Candia, Tony and the band were telling tales too … tales that ranged from local folk tales like the Witch of Berkeley (one of my absolute faves in song and story!), to witchlore to, er, activities on a certain local landmark to personal tales to touch the heart.

Inkubus Sukkubus have recently released a new album, Barrow Wake, an acoustic album full of the dark tales of Gloucestershire – and beyond (there’s an allusion to my original part of the world with Hopkin’s Man, Matthew Hopkins, the foul Witchfinder General, denizen of Essex and my native Suffolk. I’m so proud. Sigh.) It’s a great listen – sample it here, and then you know what to do!

So, they decided to play a gig in their home city as part of the History Fest, and donate the proceeds to the lovely folk at Gloucestershire Wildlife Trust who manage the Barrow Wake nature reserve. They wanted local stories to go alongside the music, so they approached Anthony and me. Candia McKormack, the lead singer of the band, also happens to have her pulse on the county – she works for Cotswold Life, and as a pagan, a nature lover and a folklore aficionado, she knew about Anthony’s Gloucestershire Folk Tales and our follow up, the Ghost Tales book. Anthony’s away right now, on a research trip for his new novel, in the South Pacific (poor thing!), so it was me. I offered a selection and Candia and Tony selected.

Two of the stories I was expecting – the Deerhurst Dragon and the Fairy Horn – but the third, the Seventh Bride, was a surprise. I was really pleased to do the Deerhurst Dragon in particular. Dragons can be seen as representative of all large predators, and our reaction to them – fear and the urge to destroy – we see even with what scraps of large mammal life we have left in Britain, such as foxes and those goalpost moving badgers. Several people came up to me afterwards to say how affected by the story they’d been – exactly what you want. It breaks my heart, too. But I also love that story because it taps into my old love – Anglo Saxon architectural sculpture. Deerhurst has some of the most intriguing in the country. Fitting for a medieval themed history festival, though a little early. The actual beast heads there are probably 9th century, and thus very rare. Nearly as rare as dragons, these days… The Fairy Horn, set in the heart of the Forest, is a classic fairies’ revenge story, and encourages you to show respect for the forces beyond your ken … like nature, like the spirit realm. The third story is a Gloucestershire Bluebeard tale, a fable to encourage young girls not to trust strangers, something we still sadly feel we must do to this day, but this tale also shows how powerful you can be in extremis – and has an unexpected long barrow with unusual and grisly inhabitants too. Dark tales…

The Inkies music was incredible – I was captivated from beginning to end. I didn’t want it to end. Candia and the band had invited fiddler Nick Gibbs from Folklaw and cellist Abigail Blackman to play with them, and I loved the acoustic sound they created together. Particular favourites were Woman to Hare (and the cat, don’t forget the cat!), the Witch of Berkeley, the title song Barrow Wake (tho’ it makes me smile when I think about the lovers in question!), and the beautiful song about the love spell that made me think, moist-eyed, about my far away love. Go to the Inkubus Sukkubus facebook page to see some clips from the night – I hope to pop some up here soon, too. I’d love to see this combination again – and in fact Candia is going to be guesting at the upcoming Folklaw gig at the Sub Rooms in Stroud 24 September. I shall be there!

And all of this in the most amazing venue, Gloucester Blackfriars. Hard to believe the difference in the site from when I worked in Gloucester 10 or so years ago. I worked in the Docks, a bare hop (not even a skip and a jump) away, and although I knew it was there, of course I never went in. Now it’s a fantastic venue, perfect for storytelling and music. So atmospheric … the courtyard magical with little lights and the sound of the superb Gwilym Davies on pipe and tabor ushering in the guests with music, and the thrill of being in the building with all its layers – the great fireplace hanging above us as we performed, that strange combination of church and home. A friend and I were wondering what ghosts marched above our heads, pacing out an afterlife on lost floors… The Inkies had made it beautiful, too, and I particularly loved the film of the Forest with fairies playing above me – what could have been more fitting for the Fairy Horn?