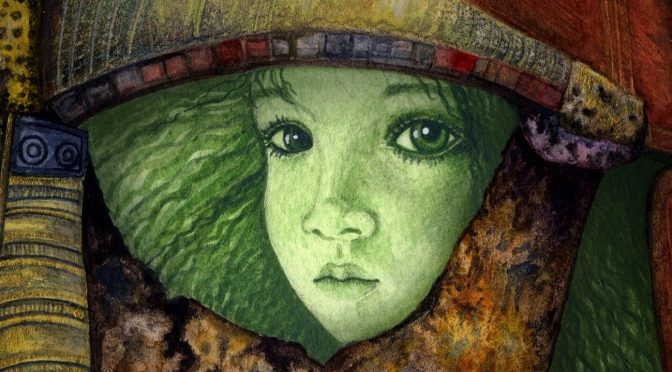 The cover image on Suffolk Folk Tales shows two of my favourite tales from the book. One, the story of King Raedwald of East Anglia, has featured already in this blog, but the one that gazes soulfully out of the page at you hasn’t – despite being one of Suffolk’s most famous tales. I’ve been biding my time, waiting for the right moment. And now it’s arrived – The Green Children features in The Anthology of English Folk Tales (The History Press) out on 1 November. I was really keen for this story to feature in the book because not only it is important for Suffolk, but is a nationally important tale, one of the first that shows the place of the fair folk – or the dead? – the Otherworld. Or does it? I’m going to do two blogs about this story – this is the first, looking at the story in Suffolk, and the places and people associated with it. The second blog will look at the theories that have grown up around this little tale – and other medieval mirabilia.

It’s an old tale, one of three in Suffolk Folk Tales recorded by the monk Ralph of Coggeshall in his Chronicon Anglicanum around the turn of the 13th century: the others being the Wildman of Orford and Malekin. Unlike the other two, the Green Children has another source, a slightly earlier source, from the Yorkshire monk William of Newburgh. The stories vary a little, but not in their essentials – the discovery of children with green skin in the small Suffolk village of Woolpit just outside Bury St Edmunds, then a major pilgrimage site for the relics of St Edmund. I decided to mostly follow Ralph’s story, for, although his is a slightly later recording, he knew Suffolk and his feels more realistic, with its names and places specified. Anyone who has anything to do with folklore will know that that is a mocker – specificity does not historical accuracy make – but when you are reaching back into the reign of King Stephen, much is inevitably guesswork.

In Woolpit they are proud of the green children – they feature on the village sign, and in the museum you can buy mugs featuring them!

I should note that Woolpit probably doesn’t mean ‘wolf pit’ as William of Newburgh assumes – or, it does, but not in the way he thinks. Woolpit’s an old village. We know of it in the early 11th century when East Anglia was under the rule of Ulfketel Snillingr. Ulfketel is in the background of another of the tales in Suffolk Folk Tales, The Legend of the Holy Wells. Woolpit (Wlfpet) was given by Ulfketel to the abbey at Bury (in thanks?) after the battle of Thetford in 1004. Ulfketel means ‘wolftrap’[i]. Is that the explanation behind the name? Simply named after the lord of the manor?

There probably were pits around the village, though. There were three Romano-British farmsteads nearby – perhaps the pits were in one of those? Or maybe they emerged from the Roman clay pit at nearby Elmswell?[ii] We’ll never know – and more on the theories in the next blog! Ironically, the story of the green children wasn’t the most famous thing about Woolpit during the middle ages. It was the site of a holy well, and a shrine to the Virgin Mary. By the time the green children were found in the late 12th century, pilgrims were probably already making their way to pray at the image of the Virgin in the church. No wonder the villagers moved the green children on so fast!

In Ralph’s version, you see, it isn’t Woolpit where most of the action takes place. According to him, the villagers take the children to the nearby manor of Wikes, to the custody of the Constable of the neighbouring hundred, Blackbourn (Woolpit was in Thedwastre hundred), Richard de Calne. He was a real person, who definitely held a manor at Bardwell. We know his granddaughter Sibilla sold land there. Her name possibly links us back to Ralph – she is ‘de Colonia’, not de Calne. Is this a reference to Colchester (Colonia Victricensis) in Essex, not far from Coggeshall? Well, probably not, but you never know – after all, he had links with the landowners at Dagworth where Malekin is set.

To my mild dismay I discovered there were two manors called Wikes – both of them in the little village of Bardwell. I confess I couldn’t discover which was the correct manor. So, after an unsatisfactory lunch at Wyken Vineyard (sorry – it was really nice, but very small and rather expensive!) I decided to plump for the other one, Wykes. If you look on an OS map today, Wykes manor is not there. However, we had an old map bought by my Grandad in the 1970s, and there it was – low earthworks near the church, clearly marked. All gone, ploughed away in the last 40 years.

The Black Bourn still trickles past, and it was possible to imagine the scene – but, as you see, there wasn’t a bump in the field to mark the house.

I felt rather sorry for it, so Wykes it was. I felt a bit sorry for Bardwell too, oblivious, it seemed, to its association with Ralph’s famous story, and was keen to bring it back into the tale.

The green girl seems to have been happy at Bardwell – although in the end she did go to yet another country … across the border to Norfolk, to live with her husband in what is now called King’s Lynn!

[i] Information taken from http://www.woolpit.org/history/